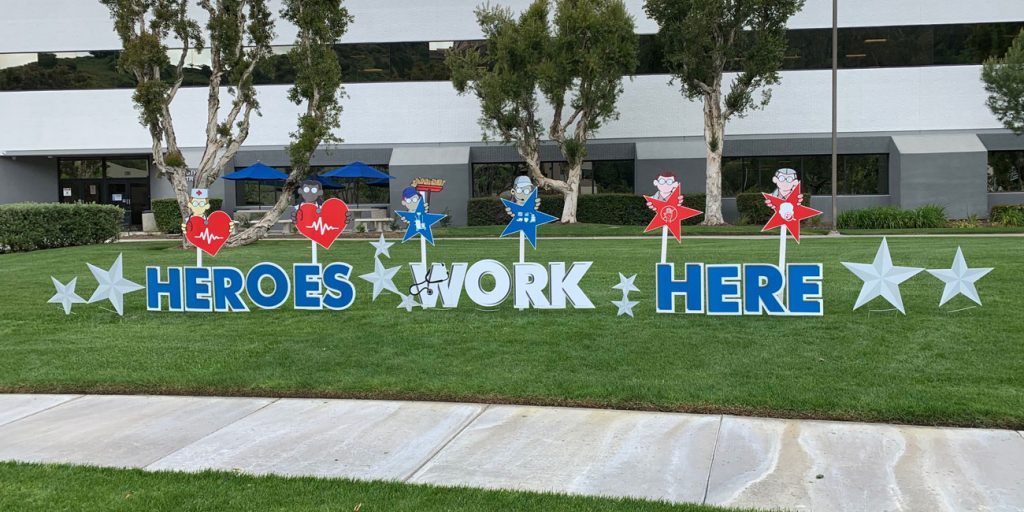 During the last several months, a series of interlocking crises have strained to their limits the operations of businesses all over the United States

CR&A Custom, a large format printing company based in Los Angeles, California, is a good example of the ingenuity and resilience American businesses are displaying as they face these daunting challenges.

A Pivot to Yard Signs and E-Commerce

The stay-at-home orders issued in late March meant the cancelation of any type of special event. With their main source of business suddenly decimated, CR&A’s management team knew they had to act fast.

During the first week of the shutdown, the company became an essential printing partner for hospitals. But it was clear that the work was not going to be enough to keep everyone employed.

To increase sales and bring back employees, the company began promoting items created by its e-commerce division: hashtag cutouts, yard signs for graduations, birthdays, and retirements, and even funeral decor.

In this process, CR&A was quick to identify a trend: While orders for commercial signs weren’t exactly pouring in, people were eager to use lawn signs to stay connected to their communities.

This observation was a lifeline for the company, and CR&A adapted to the unprecedented circumstances by pivoting its large format printing capabilities to manufacture yard signs.

These decorations became a cultural phenomenon of its own. The shutdown of school events and celebrations created a new need for custom graduation yard signs across the country. People wanted to celebrate their achievements, but it had to be done in a different, new way. Drive-by celebrations gained popularity and CR&A was uniquely positioned to meet the growing demand for yard signs thanks to its ability to print products at an exceptionally fast rate.

That was how, in addition to its usual work with some of the most popular brands in the world, CR&A began contributing to the celebration of birthdays, retirements, and graduations. The company also created some of the most prominent “Heroes Work Here” signs that honor medical and essential workers in the Los Angeles area.

The implementation of e-commerce allowed the company to reduce person-to-person interactions and reach an international customer base. For example, one of the many signs they created was sent to a US Marines base in Japan.

This shift in efforts, along with the creation of over 32 new products, allowed CR&A to continue supporting hospitals and brought production to levels that were high enough to keep workers employed and start bringing back employees.

The pivot to yard signs proved a success for CR&A, but the challenges were far from over for the company.

Over the last weeks, the disarray caused by the COVID-19 pandemic has been compounded by the crisis of the United States Postal Service (USPS).

Louis DeJoy, the current Postmaster General, has taken cost-cutting measures that have dramatically slowed down deliveries.

“We started seeing delays more heavily over the past four weeks,” said Carmen Rad, president of CR&A, to NBC News.

Matters got even worse. Some packages simply disappeared and couldn’t be traced using the USPS system. Upon entering the tracking code, the only information available was that the label had been printed in Los Angeles.

Since it was impossible to track the packages, the company couldn’t prove that the signs had been shipped in the first place. This resulted in multiple reimbursements to clients. But the damage went beyond money: In many cases, entire drive-by celebrations had been organized around the idea of kids being able to have their picture taken with the signs.

Aware of the sentimental value attached to the signs, CR&A opted to taking the loss of reprinting and shipping them again using another shipper whose tracking system was reliable. Rad estimates that the company has had to absorb about $7,000 in additional expenses, a sum that drastically reduces profits.

The collapse of the Postal Service has affected CR&A in other ways as well. Slow deliveries have forced them to cancel some checks for their vendors and wire money instead, resulting in extra charges for the company.

Like CR&A, many businesses that have shifted to e-commerce are facing these same challenges all over the United States.

“This is wrong. If small businesses are the backbone of America, why are you hurting us?” asks Rad.

Earlier this month, the Postmaster General released a statement announcing that the controversial “longstanding operational initiatives” will be suspended until after the presidential election that will take place in November to “avoid even the appearance of any impact on election mail.”

This promise may be of little help for businesses like CR&A. Mail sorting machines have been already dismantled in many states, compromising deliveries in a way that appears irreversible in the short term.

“These Are Institutions That Should be Protected”

Entrepreneurs have reacted to the news with a mix of indignation and disbelief.

“We already have so many challenges day to day and my role as a business owner is to make sure I keep my employees employed and to create new jobs,” Rad explained in an interview with Los Angeles Times. “Why are we allowing this? These are institutions that should be protected.”

Talking about the burst of ingenuity that led to the pivot to yard signs, Rad reveals the idea that drives the company’s resilience: “We believe that digital printing has endless possibilities and that artistic design provides happiness and joy.”

This Is How Universities and Colleges Use Visual Communication to Create Unique Brand Experiences
September 10, 2021

How Large Format Printers Capitalized on the Existing Workforce Skills During Covid
March 12, 2021

Go to Top
GET A QUOTE TODAY!